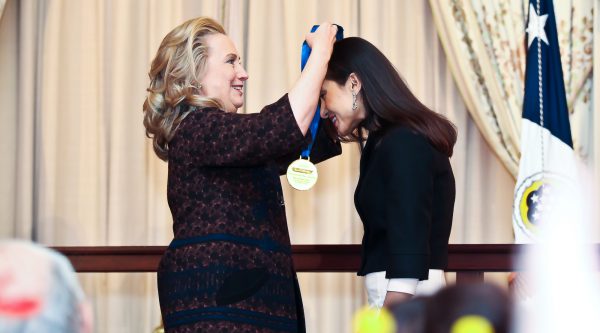 Clinton to award US State medal for arts to Pakistani artist

US State Department selects Shahzia Sikander among five artists to receive recognition for their art in US embassies. PHOTO: art.state.gov US Secretary of State Hillary Clinton will award the US State Department Medal of Arts to Pakistani painter Shahzia Sikander, along with four other artists, reported LA Times. This is the first time this award has been given. Clinton will be recognizing artists who contributed to the Art in Embassies program in US missions all over the world. The State Department organizes art exhibitions at foreign missions to generate goodwill and they usually include works from American and local artists. Sikander’s work was highlighted during an exhibition in the US Consulate in Karachi in 2011. One of her pieces is on permanent display at the consulate. The artist was born in Lahore and currently lives and works in New York City.