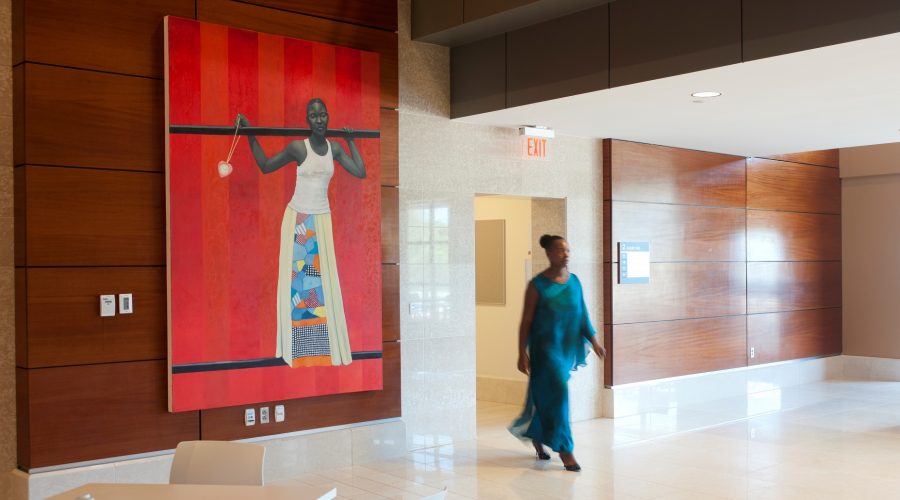 IIP.gov – Ever since the U.S. Embassy in Khartoum, Sudan, unveiled its collection of 40 original artworks on June 24, embassy visitors have been enjoying an eclectic mix of paintings, sculptures, photographs and fiber works by Sudanese and American artists that explore such themes as ritual, identity, symbolism and spirituality.

IIP.gov – Ever since the U.S. Embassy in Khartoum, Sudan, unveiled its collection of 40 original artworks on June 24, embassy visitors have been enjoying an eclectic mix of paintings, sculptures, photographs and fiber works by Sudanese and American artists that explore such themes as ritual, identity, symbolism and spirituality.
These works, assembled by curator Virginia Shore for the U.S. State Department’s Art in Embassies (AIE) program, are inspired by the diversity of Sudan’s African and Arabic peoples. Art collections are installed at U.S. embassies worldwide, and the new, permanent collection in Khartoum aims to transcend barriers of culture, time and language through a visual representation of shared motifs.

U.S. diplomatic posts typically showcase works that reveal an artistic dialogue between the host country and the United States. “We try to create thematic exhibitions so they can tell a story in themselves,” said Shore, acting director of the AIE program. To date, AIE has worked with nearly 8,000 artists around the globe to provide dynamic, culturally significant visual arts to U.S. embassies and ambassadorial residences.

American artist Sharif Bey, who creates ceramic/mixed-media pieces, is among the artists whose work is featured in the Khartoum exhibition. In a recent interview, he described his participation in the AIE program and talked about the inspiration behind his Black Ice series of ceramic sculptures.

“I was involved in an exhibition of contemporary craft artists of color, which had traveled for a few years,” he said. “Virginia Shore took an interest in the exhibition, and contacted the curator to inquire about the work.” Shore purchased one of Bey’s pieces for display in Khartoum and also commissioned two other works from him, requesting that they be produced on a monumental scale. As a result, visitors to the U.S. Embassy in Khartoum can see three of Bey’s distinctive ceramic sculptures, including Ivory Bling (2005), a dramatically oversized African-style necklace with individually burnished beads.

By focusing on the aesthetic qualities of functional objects, such as jewelry items, Bey challenges the assumption that traditional and contemporary crafts should be assigned a lesser status than other art forms. “I am a craft artist,” he said. “I’ve been taught to have regard for how things are made. But in certain quarters, there’s a notion that the history of a material” — clay, for instance — “arrests its [artistic] development. That’s a very Western notion; we tend to view ‘high art’ as pieces that you can’t use or interact with.”

“I can reference any functional object as a point of departure for sculpture,” he said. “And as someone who primarily trained as a functional potter, I gained a new perspective on what jewelry meant” when designing sculptures based on strands of tribal beads or other personal ornaments.

Bey’s work invites viewers to reflect on the complex nature of adornment, as his Black Ice series demonstrates. “Two things were the impetus for this series, which I started about five years ago,” he said. “I saw a poster titled ‘Women of the African Arc’ showing the image of a young Berber princess, no more than 15 years old and newly married. She wore large amber beads, which raised the issue of what adornment means and what it says about our notions of cultural identity.”

Exaggerating the size of an intimate object, like a necklace, raises other questions, too, Bey said. “What does it mean to wear beads of a provocative scale? And the weight of those beads — both physical and psychic — how does that affect the wearer?” All of his pieces are created “in proximity to the human body, and that’s how they should be understood,” he added.

His large-scale pieces, Bey said, affirm the need “to sustain one’s cultural identity in today’s world, where there’s a McDonald’s [restaurant] on every street corner.” In an era when popular culture tends to obliterate echoes of the distant past, the heavy beads of Bey’s ceramic sculptures illustrate “the burden of sustaining tradition,” he said. “As a metaphor, that’s what that weight is about.”

When designing ceramic sculptures, “I reference various elements of popular culture, African jewelry and the natural world,” Bey said. “The tactile quality of my work is really important. I like it when people say, ‘I want to touch it,’ and I encourage them to do that.”

Looking back on his experience with the AIE program, Bey said: “I’m proud to have been a part of it, and to have my work displayed at the U.S. Embassy in Sudan.”