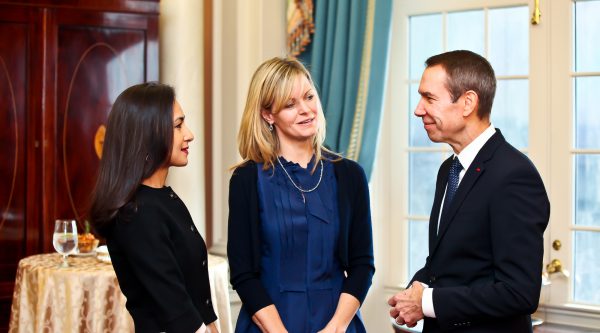 For Virginia Shore, international diplomacy is about more than treaties and trade agreements, speeches and summits. Rather, when it comes to building bridges between nations, paintings, drawings and sculptures are her tools of choice.

SPAN Magazine – Art as Ambassador – Five decades strong, the Art in Embassies program builds bridges within communities around the world.

For Virginia Shore, international diplomacy is about more than treaties and trade agreements, speeches and summits. Rather, when it comes to building bridges between nations, paintings, drawings and sculptures are her tools of choice.
Shore serves as the chief curator for Art in Embassies, an expansive program that places a diverse array of visual artworks in American diplomatic buildings. In fact, she and her team oversee the installation of artworks in U.S. embassies,
consulates and ambassador’s residences around the world, curating meticulously-planned exhibitions—both temporary and permanent—with each space and host country in mind.

To create its exhibits, Art in Embassies commissions and chooses works from both American artists and those who call a host country home. The result? Eye-catching collections for sure—but, more importantly, ones that, in Shore’s words, provide international audiences with a sense of the quality, scope and diversity of both countries’ art and culture.

Take, for example, a wall sculpture created by Sanford Biggers at the American Embassy in Madagascar. Hewn from metal and shaped in the form of a lotus, the sculpture reveals a deeper meaning upon closer examination. “The petals of the flower are laser cutout rows of figures resembling paper dolls and based on diagrams of the hull of a ship,” says Shore.

Similarly, works installed in buildings within India carry their own deeper meanings. “For the consulate in Mumbai, we worked with Indian-born artist, Subhankar Banerjee, who calls himself an eco-critical photographer, artist, educator and activist,” says Shore. “His images of the Arctic National Wildlife Refuge and other Alaska wild lands have received attention globally. His landscapes document the changes in the migratory patterns of the animals as a result of climate change and oil drilling in the Refuge.”

“These are examples of the ways the art can inspire conversation about issues and concerns in our country and the host country,” Shore adds.

Often, Art in Embassies provides opportunities for cultural exchanges that go deeper than the artwork itself. During a trip to Swaziland, American artist Mari Gardner worked with local residents from the AIDS Support Center to record their stories and capture photographic self-portraits. The audio recordings were then played back as the portraits were projected as part of an installation at the U.S. Embassy in Mbabane.
“This screening allowed for an immediate impact as well as an unusual opportunity for Swazi artists to interact with rural women,” said Gardner. “The advancement of democracy and human rights in Swaziland is a key priority. Gender-based violence continues to erode this tiny country.”

Constance Parker, wife of the American ambassador to Swaziland at the time, further described the impact of the exhibition on the Swazi citizens who participated: “It changed them and their perceptions of their place on this earth forever,” she said. “They left the Embassy with their heads just a little higher.”

Art in Embassies traces its roots to 1953 in New York City, when the Museum of Modern Art began efforts to display American art around the world. A private program at the time, the endeavor attracted the support of philanthropists and diplomats, and a public-private partnership with the U.S. Department of State soon followed. In 1963, President John F. Kennedy declared Art in Embassies an office of the State Department, launching the program into the orbit it continues to follow today.

Circa 2015, Art in Embassies continues to soar, with exhibitions in 189 countries and counting. The last decade alone has also seen over 100 artists following in Gardner’s footsteps, traveling to countries around the world to work with local artists on pieces that are then exhibited in embassies, consulates and beyond.

For the full SPAN article by Michael Gallant see: http://span.state.gov/entertainment/art-in-embassies/20150103