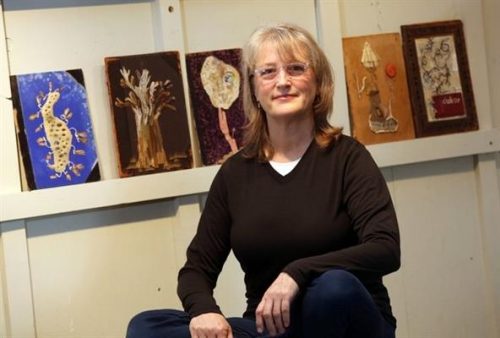 Area Artist to Show and Tell of Senegal Journey at Hammerfriar

Next weekend, Saturday Jan. 19, she’s giving a talk about her experiences at Hammerfriar Gallery in Healdsburg, where her work is represented locally.

Last month, Jenny Honnert Abell traveled to Dakar, Senegal, to experience the people and culture of that West African country.

Next weekend, Saturday Jan. 19, she’s giving a talk about her experiences at Hammerfriar Gallery in Healdsburg, where her work is represented locally.

This opportunity to travel in Senegal came as part of a commission she was awarded by the Art in Embassies program run by the State Department, which celebrated its 50th year in 2012. The inspiration she found on that December 2012 journey will be reflected in 10 works she is creating to be installed permanently in the new U.S. Embassy building in Dakar, scheduled to open in March 2013.

The visual artist has been living and working in Santa Rosa for 18 years, and her work is widely shown throughout the United States. She is represented by galleries in Santa Fe, NM, Sun Valley, ID, Nashville, TN, San Francisco, as well as Hammerfriar.

Abel works with mixed media on both large panels and old book covers. A recent solo show this past summer at Hammerfriar included work from both styles, focusing on her recurring themes of an imaginary, eccentric natural world and human headed birds.

Jenny Abell’s talk at Hammerfriar Gallery will be on January 19, from 6 – 7:30 pm. She will present photos and talk about her visit to the Embassy, markets, rug factory, and Goree Island, where the Portuguese settled in 1444, and slaves were traded in the 1780’s. Jenny will also present a few of the finished, unframed works that will become part of the installation in Dakar.