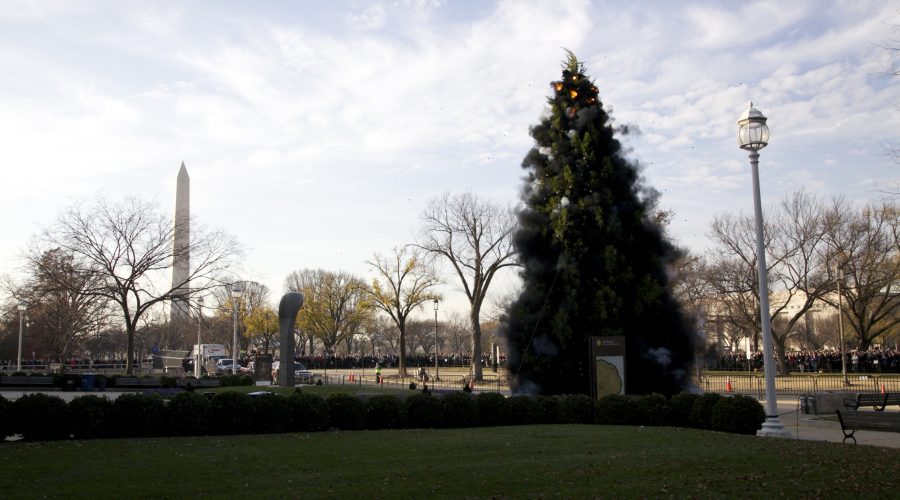 Nation's Capitol Ushers in the Holidays with an Exploding Christmas Tree

Chinese artist Cai Guo-Qiang doesn’t hate Christmas; he just loves blowing things up. And so it was that at 3 p.m. Friday in Washington, D.C., tourists on the National Mall were exposed to the thunderous spectacle of a Christmas Tree going fire-spitting nuclear. D.C. was a suitable locale for Cai’s “Black Christmas Tree,” given the city’s obsession with things that go boom. (And oddball Christmas trees.) The pine-scented kaplooie! occurred outside the Freer Gallery of Art to herald the 50th anniversary of the State Department’s Art in Embassies program, which has installed paintings and sculpture in more than 200 diplomatic outposts. In total, there were three walloping, pine needle-flinging salvos, the last popping off after a great cloud of black smoke partially dissipated over the boughs. Here’s how the Smithsonian Institution described Cai’s combustable artwork, which probably would not transfer well to a Santa Claus: A 40 feet tall pine tree will be suspended with 2,000 purpose-built black smoke air burst fireworks. Upon ignition, black smoke puffs will ‘light up’ simultaneously from all points in the tree, as though they are twinkling Christmas lights at a tree-lighting ceremony, followed by a cascade of black ink-like smoke that mimics the flowing beauty of traditional Chinese brush drawings. The black tree-shaped cloud of smoke drifting through the air will create a spectral scene of two trees, one real and one ethereal.