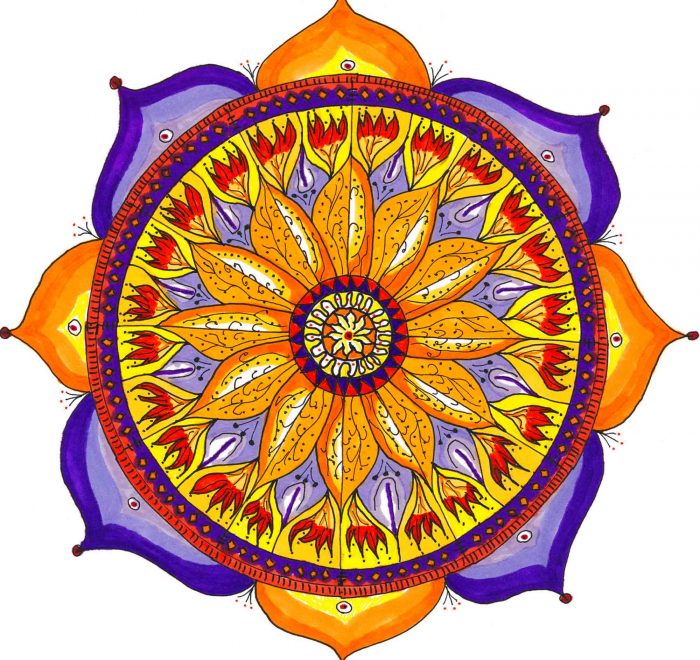 The Spirit Connection: Chris Flisher Brings The Art Of Mandala To Cape Verde Through Art In Embassies

Entering the hotel lobby I spotted Chris Flisher right away. Long grey flowing hair, laid-back composure. We are sitting down for a chat at a hotel in Cape Verde, off the coast of West Africa, where Flisher has come from Massachusetts to be part of the Art in Embassies program.

Among other things, Flisher is an artist specializing in the spiritual art of the mandala. The American Ambassador to Cape Verde, Adrienne O’Neal, selected Flisher to not only have some of his art work showcased on embassy property but also to teach the art of mandala to some young people in Cape Verde.

“The ambassador found about me online,” explains Flisher. “She Googled ‘spirit in art’ and discovered me. She sent me an email and I answered her right back. I was so excited she was interested in the mandala. And Art in Embassies embodies what my work is about, sharing positivity with others. I knew about the Cape Verdean community in Boston, so I wanted to be a part of this.”

Art in Embassies (AIE) has been in running for 50 years now, playing a role in U.S. public diplomacy through a cross-cultural dialogue via the visual arts and artist exchange. The concept of a global visual arts program was formulated by the Museum of Modern Art in 1953, and made official by President John F. Kennedy at the U.S. Department of State in 1963. Today, AIE is a public-private partnership involving more than 20,000 participants globally, including artists, museums, galleries, universities, and private collectors, and encompasses over 200 venues in 189 countries. Each year, professional curators and registrars create and ship about 60 exhibitions. Since 2003, more than 58 permanent collections have been installed in the Department’s diplomatic facilities worldwide.

Flisher’s art work is now hanging in the American Embassy in Cape Verde and during his trip he taught the skill of painting a mandala to three groups of children. “They all seem fascinated on who to create the mandalas,” says Flisher. “They took to it right away. It was very gratifying to see them respond so quickly.”

The mandala is a spiritual and ritual symbol in Hinduism and Buddhism, representing the Universe. Most mandalas are squares with four gates containing a circle with a center point. Mandalas are used as spiritual teaching tool, for establishing a sacred space, and as an aid to meditation.

“The kids also grasped the spiritual aspects of the mandala,” says Flisher. He adds, that beyond the spirituality of mandalas they are also great to teach kids because it involves math skills, drawing perfect circles and squares.

Flisher is also considered one of the Top Ten Astrologers in the United States. Flisher, who is also a teacher, speaker, writer, and radio host (“Turning of the Wheel”), sees astrology and the mandala as complementary tools as they both bring about a greater understanding of self and provide guidance.

He says that astrology is also a way to understand society. “The alignment of the planets right now is the same as in the 1960s,” he notes. “We are in a new period of social upheaval, which is why we are seeing so many racial situations. It is all based on historical cycles and if we pay attention to these cycles we can be prepared for great change.” To view the article at the source, click this link: http://newyorktrendnyc.com/2013/08/12/the-spirit-connection-chris-flisher-brings-the-art-of-mandala-to-cape-verde-through-art-in-embassies/