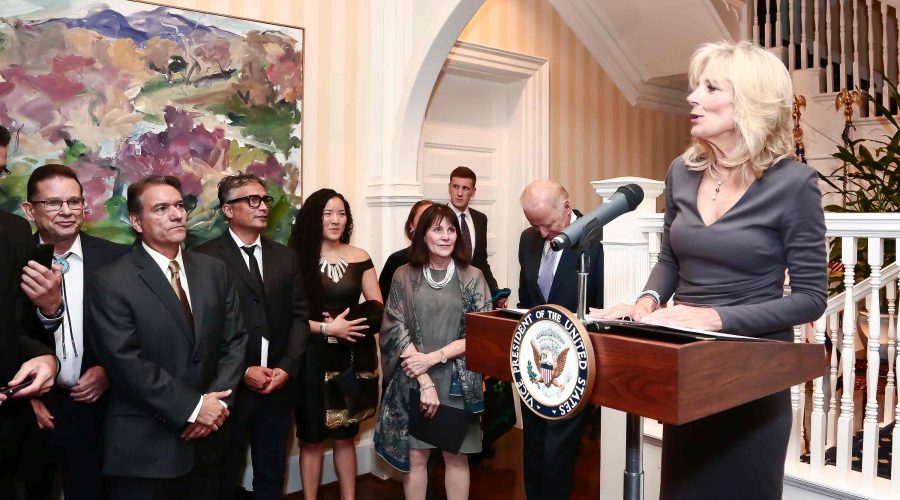 UMSL Daily – As a printmaker, Jeff Sippel’s work has been seen all over, but even he never dreamed he’d have the honor of working with artists from around the world and meeting the vice president of the United States.

Sippel, professor of art and art history at the University of Missouri–St. Louis, was selected this summer to serve as the Collaborating Master Printer, working with five other artists at the printmaking studio of the Institute of American Indian Arts in Santa Fe, N.M.

“In this position, I collaborated with the artists in the creation of printing elements that would be assembled together in various colors and layers,” he said. “Once the artist and I had a completed print we were satisfied with, I printed editions of 33 impressions of the approved prints.”

The art will be exhibited at U.S. diplomatic facilities around the world.

And even after his work was completed, the honor was not.

“I was invited to a reception at the home of Vice President Joe Biden and his wife, Jill,” Sippel said.

Jill Biden hosted the event held in late October to celebrate the collaboration between the U.S. Department of State’s Office of Art in Embassies and the Institute of American Indian Arts, as well as artists Tony Abeyta, Jeff Kahm, Courtney Leonard, Dan Namingha and Crystal World.

“I have been honored to collaborate with artists throughout the world beginning in 1978, but I never dreamed I would be acknowledged for my collaborative scholarship by the Office of the Vice President,” he said. “It was also most rewarding to work with each of the Native American artists.”

Sippel said meeting the vice president and his wife was an amazing experience.

“When my wife, Susan, and I spoke with Vice President Biden, he started by telling Susan that ‘Jeff and I have something in common.’ Susan replied, ‘What is that?’ and Biden confessed, ‘We both married up,’” he said.

Sippel joined the UMSL faculty in 1998. Prior to that, he served as education director of the Tamarind Institute from 1988-98, was on the faculty at The Ohio State University from 1985-88 and in 1981 served as director of the the Quensen Lithographic Studio in Lamspringe, Germany.