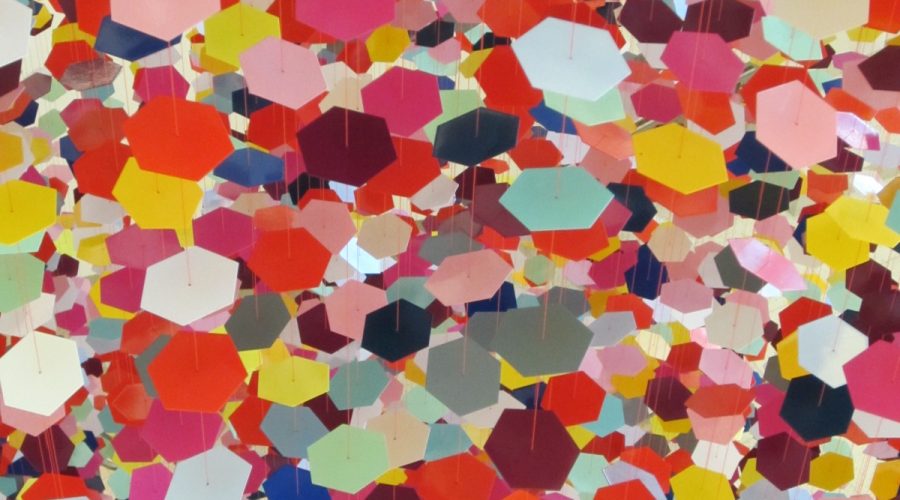 For 50 years, the State Department’s Office of Art in Embassies has selected and displayed American art, mostly behind locked doors in highly secure buildings. The pieces AIE purchases for embassies, and borrows for ambassadors’ residences, are usually seen only by official guests.

“It may not be something specifically that the American citizen can experience,” said Art in Embassies Director Beth Dozoretz. Yet “pretty much anyone from the State Department who goes to our embassies comes back to us and says the exhibitions on loan are a very, very important tool for outreach.”

This week, that outreach comes to Washington, with a series of events that allow the public a glimpse at what AIE does. Most conspicuously, from Wednesday to Friday the video screens outside Verizon Center will display 161 photographs from “Serving Abroad . . . Through Their Eyes,” an AIE-sponsored show of photographs made by active-duty military and Foreign Service personnel. More than 3,200 images were submitted for the exhibition, which will be shown at the Pentagon, the State Department and the U.S. Embassy in Kabul.

A performance on Wednesday will feature dancer and visual artist Nick Cave in collaboration with students at the Town Hall Education Arts Recreation Campus in Southeast Washington. The event is part of an open house at the cultural and community center and will feature participants from the Washington Ballet, the Levine School of Music and the Corcoran College of Art and Design.

Among the more than 20 artists participating in the AIE celebration, five will receive the State Department’s Medal of Arts from Secretary of State Hillary Rodham Clinton: Jeff Koons, Cai Guo-Qiang, Shahzia Sikander, Kiki Smith and Carrie Mae Weems. On Thursday, those artists will discuss their work with Museum of Modern Art Director Glenn Lowry at the Woodrow Wilson International Center for Scholars. (It was MoMA that started the private predecessor to AIE in 1953; it became a government program a decade later.)

In addition to marking AIE’s 50th anniversary, the events illustrate the program’s evolving role and philosophy. As the United States builds a new generation of highly fortified embassies, AIE is making its contribution a little more public. Structures from Beijing to Bucharest have been designed with art visible from the street.

The office provides art, mostly contemporary, to about 200 buildings in 189 countries. It curates about 60 temporary exhibitions per year and since 2003 has installed 58 permanent collections in diplomatic facilities. The art is purchased with federal money, although some events — including those for the anniversary — draw on private funding.

Among AIE’s cultural exchange programs are lectures and demonstrations by American artists overseas. But the program also mixes American art with indigenous works and encourages U.S. artists to engage local cultures. To make a monumental piece for the new embassy in Dakar, Senegal, visual artist Cave traveled there.

“He and I went to Senegal in January and met with about a dozen Senegalese artists,” said Virginia Shore, AIE’s chief curator. “He’s going to incorporate the work of a handful of those artists in this big bas-relief we’ve commissioned him to do.”

At the U.S. Embassy in Beijing, which opened in 2008, AIE installed a giant Koons sculpture of tulips visible through an opening in the wall. “It’s sort of the iconic statement for this beautiful embassy,” Dozoretz said. “Because of the buzz that comes from people being able to walk by and see it, as well as [Koons’s] own reputation as an artist, when he went there to do an exchange program for us, over a thousand people showed up.”

Art that is visible from outside the embassy, Shore said, “has become a big focus. With every new project that we do, we are making sure to do some sort of an outdoor piece so that the general public can see the work.”

Not all embassy art can be public, though. AIE began the Washington portion of its 50th-birthday bash with an Oct. 25 appearance by artist Antony Gormley at the British Embassy, where he dedicated a sculpture that can’t be seen outside the security perimeter. “That’s a bit of a betrayal of my profound belief that art is for everyone,” Gormley said of the piece’s secluded place in the garden beneath the ambassador’s residence. “For most of mankind’s existence, art has been an expression of collective belief, collective aspiration. And made collectively.”

As shown by Cave’s Dakar bas-relief, as well as other recent projects, collective artmaking is part of AIE’s mission. However effective the office’s cultural exchange programs are, however, most of the art it furnishes to embassies is likely to remain behind blast-proof walls.

Jenkins is a freelance writer.

Serving Abroad . . . Through Their Eyes