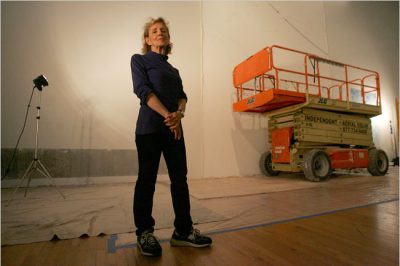 Employing Art Along With Ambassadors

Dorothea Rockburne, a thin, elfin woman in oversized blue sneakers, was 40 feet up, inspecting the tippy top of a huge canvas that hangs on the southern wall of the Queens Museum of Art. With one hand she grasped the orange railing of a scissor lift, creaking and swaying like a battered ferry on a windy day; with the other she held a cellphone to her ear. “We got the paint!” she declared, raising her fist in triumph.

Dorothea Rockburne, a thin, elfin woman in oversized blue sneakers, was 40 feet up, inspecting the tippy top of a huge canvas that hangs on the southern wall of the Queens Museum of Art. With one hand she grasped the orange railing of a scissor lift, creaking and swaying like a battered ferry on a windy day; with the other she held a cellphone to her ear. “We got the paint!” she declared, raising her fist in triumph.

Ms. Rockburne, with help from a team of artists, is working on a gargantuan mural of deep blues, shimmering aquas and luminous gold leaf that is headed for the American Embassy in Kingston, Jamaica.

“It shows the constellations in the nighttime sky when Colin Powell was born,” Ms. Rockburne explained, referring to the former secretary of state and chairman of the Joint Chiefs of Staff, whose roots extend back to Jamaica.

For most people around the world, American culture pours out of a television or movie screen. Yet Ms. Rockburne’s painting is part of another means — less known and more highbrow — of exposing American art to foreign eyes. She is one of hundreds of prominent and accomplished artists who have either donated or been commissioned to create art for the scores of new American embassies, consulates, residences and other buildings that have been opened in every part of the globe during the last decade.

For the next two months, visitors to the museum can watch Ms. Rockburne’s team at work. After that the canvas will be rolled up and sent to Kingston, and the wall on which the mural hangs will be torn down as construction on a new museum extension begins.

There is little wiggle room on the deadline and work has already been delayed twice. First the large hydraulic scissor lift wouldn’t fit through the museum’s door, so a hole had to be punched in a wall to get it through. Then the archival, iridescent acrylic paint ordered from Switzerland was held up at customs.

And now, on this rainy June day, the project has hit another bump. Titanium white, the color needed for the underlying coat, is running out, and the paint manufacturer (American this time) said it would take two weeks to deliver more. Ms. Rockburne had been wrangling to speed up the delivery and that airlifted phone call told her she had succeeded.

After hanging up, she ran her fingers over the canvas. “I think it needs more texture,” she said. Not so heavy that it looks like stucco, but not flat, she explained. “And it should be extra heavy in the middle section where the Milky Way is.”

The artists assisting her have been practicing the unusual technique she developed, which involves dabbing paint on a canvas in layers with round masonry brushes — each about the size of an old 45 r.p.m. record.

“It has to do with getting light between the layers of the paint,” she said. The iridescent colors will cause the night sky to sparkle, giving “spatial mystery to a flat surface.”

Ms. Rockburne was asked to create the mural by the Foundation for Art and Preservation in Embassies, a nonprofit group that works with the State Department to create and donate custom-made artwork for American outposts abroad. In 2001, the foundation gathered 245 pieces of art for State Department buildings worldwide; it has also commissioned more than a dozen large installations like Ms. Rockburne’s.

The foundation, which has an art advisory committee whose chairman is Robert Storr, dean of the Yale School of Art, has curated some significant pieces, but the vast majority of the art is provided — through loans, acquisitions and commissions — through the department’s own ART in Embassies program, created in the early 1960s to promote cultural diplomacy.

The past decade has been particularly busy. Ever since 1998, when terrorist bombs struck the American Embassies in Tanzania and Kenya, the United States has been building or renovating its foreign outposts. In the last eight years, the department has built 68 new facilities and has another 28 under design and construction, said Jonathan Blyth, Director of External Affairs for the State Department’s Bureau of Overseas Buildings Operations. To keep up with the demand, ART expanded its mission in 2005, seeking to acquire new works by both American and host country artists. Since then works have been installed in about 30 embassies, according to Virginia Shore, the chief curator and acting director of the program.

“The curators of the program are sensitive to political, religious, sexual” matters, Ms. Shore said, and they “do extensive research on the culture of the host country.” The artists often work closely with the architects and professional curators (and the foundation, if it’s involved) to find an appropriate space and to make the work as accessible as possible despite the rigorous security requirements — help that the artist Joel Shapiro said was extremely useful. Ms. Rockburne, who traveled to Kingston to look at the wall where her work would hang, said she was given total creative freedom.

Ms. Shore said she was not aware of any artist who declined a commission because of politics, but some previously did not want to loan work because of opposition to the policies of the Bush administration.

The amount of money allotted for each building is calculated with a formula based on the gross square footage, Ms. Shore said. Maya Lin, the architect who created the Vietnam War memorial in Washington, was one of 28 American and Chinese artists the program asked to create work for the American Embassy in Beijing, which opened last summer. ART has about $4.5 million to spend each year for its permanent collections, though the collection is valued at many times that amount. “Dealers and artists all really work with us,” Ms. Shore said. The art in Beijing, for example, cost about $800,000, she said, but has been appraised at $30 million. The total value of art on loan to the embassy program is estimated at $200 million.

The foundation has also been involved with the buildings in China, inviting Ellsworth Kelly and Martin Puryear to create pieces specifically for the embassy in Beijing. (Two sculptures by Louise Bourgeois were also donated.) Mr. Kelly, who also created a sculpture for the Berlin embassy, has completed a sculpture that is not yet installed.

“They’re beautiful,” Mr. Kelly said of his 18-foot pieces. One side is painted in red, white and blue, he explained, while the other has the same design in red and yellow, China’s colors. Mr. Shapiro, who created a work for the American Embassy in Ottawa, was asked by the foundation to do something for the consulate in Guangzhou, which handles all American adoptions in China. “It’s a challenging commission, embassies are not very accessible,” Mr. Shapiro said. You want to create something “that has a warmth and humanity to it” to counter the architecture’s fortresslike requirements.

Part of the lure is the chance to create on such a large scale, he added: “You can’t just do work like that on your own.”

As for the program’s goals, Mr. Shapiro said he hopes art can contribute to a dialogue between cultures. “I think art has a kind of universal appeal,” he said, “I would like to think, that people can really respond to it.”