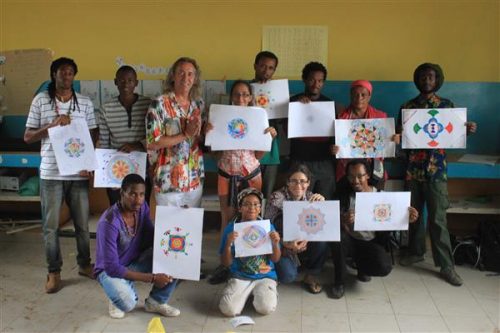 BOXBOROUGH — An artist and astrologer, Chris Flisher is a close observer time, distance and space, as well as the celestial sky from which he draws inspiration when he creates his colorful spiritual drawings – called mandalas – in his Boxborough home studio.

Now Flisher’s artwork is on display half a world away, in Praia, Cape Verde, an archipelago nation spanning 10 islands off the coast of western Africa, a place that might seem as far and as different as the moon to many Americans.

Flisher’s art was recently selected by the U.S. State Department’s Art in Embassies program which showcases American art across the globe, installing it in U.S. embassies, consulates and annexes across the globe. Created in 1964 by President John F. Kennedy, the program’s aim is to help create cultural bridges between countries.

“I really stand behind their notion of diplomacy through art,” Flisher said, “that instead of invading countries with weapons, we will invade countries with art.”

Flisher’s mandalas are connected geometric forms, created using with pen, ink and watercolors. Based on Buddhist and Hindu traditions, mandalas use circles and repeating designs to represent the cyclical and dynamic qualities of the natural world. It’s a form of abstract art , Flisher said, that utilizes radial balance to encourage meditation and connectedness.

“When I was 18 or 19, I happened to see a whole wall of mandalas, and they really had an impact on me,” Flisher said as he pointed to a wall covered with his work in his Boxborough studio. “I was familiar with the geometric forms because I had been studying architecture, so there was something that fascinated me about the way the lines and angles lined up in those mandalas.”

Flisher noted that it is this sense of familiarity that draws people to his work. Even if viewers do not recognize Flisher’s pieces as mandalas, they identify with the elaborate patterns and rich colors.

“The mandala art form is largely unknown in the Western world, but has conveyed a spiritual connection with people for thousands of years,” said Suzanne Schultz, owner of Canvas Fine Arts Gallery 601 in downtown Boston, where Flisher just wrapped up a month-long exhibition. Schultz said Flisher’s work was well received, and his powerful vision and message resonated with viewers.

Mandalas are traditionally created by monks for religious reasons, mainly to establish a sacred space and focus attention on devotional practice. Flisher’s work conveys these longstanding traditions but also adopts a more contemporary approach, with emphasis on reaching a wide audience. Pieces often depict a number of religious symbols, like the Hindu Om or the Jewish Star of David, and celestial themes of astrology.

To view the full article, click on the following link: http://shrewsbury.wickedlocal.com/fun/entertainment/arts/x1665846810/Chris-Flisher-Invading-the-world-with-art#axzz2EeuXJJ5w