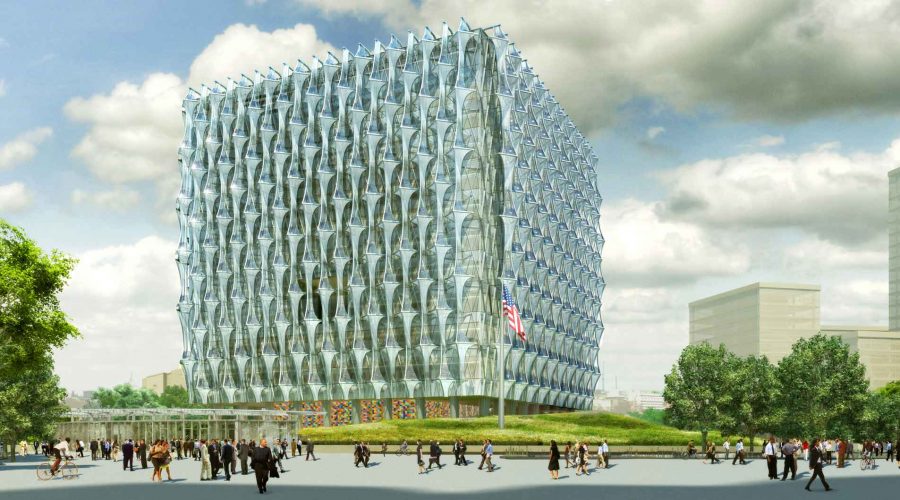 Financial Times – Dignitaries visiting the new US embassy in Nine Elms, south London, which is due for completion in late 2016, will encounter a commanding, site-specific work that is America incarnate. Los Angeles-based artist Mark Bradford’s work, “The Constitution”, will span 32 canvases and cover the embassy atrium. This gargantuan, patriotic piece will incorporate the entire text of the US Constitution.

Bradford was commissioned by Art in Embassies (AIE), a US governmental body which, proclaim state officials, “has been speaking the universal language of cultural diplomacy” for more than 50 years. AIE was established by New York’s Museum of Modern Art in 1953, and was formally made a public-private arts organization by the Kennedy administration in 1963.

AIE’s curators organize temporary loan exhibitions for ambassadorial residences worldwide with works on loan from artists, museums, dealers, corporate collections, private collectors and others. The length of a loan is usually about three years. Recently it put together a contemporary art exhibition for the US ambassador to Spain, James Costos, that included more than 80 works by artists such as Ed Ruscha, Julie Mehretu and Theaster Gates .

Virginia Shore, AIE deputy director and chief curator, says the Madrid display is easily its “most extensive loan exhibition in recent history”. Most of the works are on loan from high-profile artists, dealers, foundations, and private collections in the US and Spain including the Museo Thyssen-Bornemisza in Madrid and the Robert Rauschenberg Foundation in New York.

AIE also creates permanent collections, acquiring and commissioning works by US and host country artists. Since 2000, more than 58 such collections have been created and installed in diplomatic facilities worldwide. “The art humanises the buildings and connects our countries culturally,” Shore says. “Highlighting local artists is critical to this public diplomacy effort.”

AIE curators also follow “artists’ careers, and the market, tracking down pieces at outlets such as student exhibitions, art fairs and biennales”, Shore says, and artists can submit works online for consideration.

“Funding for the purchase of art for most new US embassy and consulate projects is included as part of the project budget, allocated at 0.5 per cent of the value of the construction contract,” says an AIE statement.

British artist Idris Khan has been commissioned by AIE to create a new composite for the US embassy in Islamabad — a stamp painting incorporating English text and Arabic calligraphy — which is due to go on show by summer of 2016.
Another key AIE commission is due to go on show at the new US embassy in Kabul this year. Serving Abroad …   Through Their Eyes (2012) is a video montage by the Chicago-based artist Lincoln Schatz that incorporates audio and images selected from photographs submitted by military and US Foreign Service personnel.

Significantly, the piece was made in collaboration with the US Department of Defense. Schatz is convinced that Art in Embassies is fit for purpose. “Their curators understand the power of art to communicate, no question,” he says, though he wonders how the work will be received in Afghanistan.

Philadelphia-born artist Graham Caldwell has also made a number of works for AIE. These include a glass and stainless steel sculpture (“Mechanical Cloud”) installed at the US embassy in Kiev in 2011, and “Cochlia III”, another glass piece unveiled in Istanbul in 2003.

“I was invited, along with another artist, to Istanbul on a whirlwind cultural exchange for three days of studio visits, discussions, demonstrations at a glassblowing facility, and slide presentations. It was during the early part of the Iraq war and most of the rest of the world was horrified by what the US was up to,” he says. “I was able to vent, listen to, commiserate and connect with artists, writers and students in a personal way that picked away at some of the more monolithic aspects of nation and state,” he adds. His insights underline how AIE advocates soft power through art and culture, promulgating the more humane side of the superpower.

AIE has asked Ohio-born artist Jenny Holzer to make a work for the new base in Nine Elms; she will set into its stone walls quotations chosen in part by US and UK students. I ask Holzer, who is known for her politically engaged art, if she had any doubts about the commission. Does she disagree with some aspects of US foreign policy? Her diplomatic answer: “I like art as policy.”