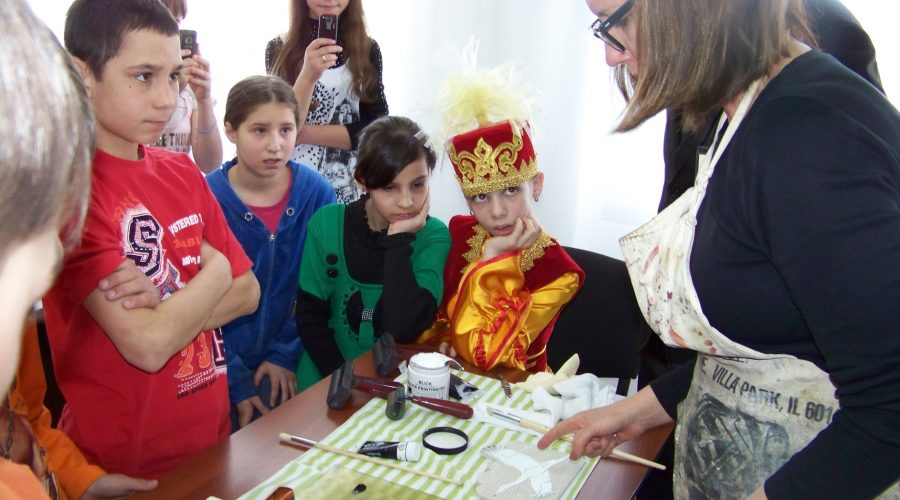 Though Wilkes University associate professor of art Sharon Cosgrove speaks neither Kazakh nor Russian, the two primary languages of Kazakhstan, she said that when she travels there at the end of the month, she doesn’t expect the language barrier to be much of a problem.
As part of the U.S. Department of State’s ART in Embassies program, Cosgrove’s trip will take her to areas with strong English-speaking populations and she will also be accompanied by a translator fluent in both Kazakh and Russian. However, Cosgrove explained, there is something even greater that allows her to communicate on a deeper level with the people of Kazakhstan.
“Even though I don’t speak the language, we have the visual language of art,” Cosgrove said. “Colors, lines, shapes, styles. It transcends politics or climate and things like that.”
From March 26 to March 31, Cosgrove will spend time in Kazakhstan visiting schools and cultural institutions in the Kazakhstani cities of Astana, Kostanay and Almaty. There, she will act as a cultural ambassador, meeting and greeting Kazakhstani citizens and officials and also offering lectures and classes to Kazakhstani art students. Four of Cosgrove’s paintings are also on display at the U.S. Ambassador Kenneth Fairfax’s residence in Astana.
Started in 1963, the Art in Embassies Program will soon celebrate its 50th anniversary. In all those years, Cosgrove points out, the program has allowed the United States to share thousands of works of art with its international neighbors, so much so that art historian Henry Geldzahler notably referred to the program as a ”footprint that can be left where people have no opportunity to see American art.”
Arguably more important, though, is the way the program allows for mutually beneficial cultural exchange, as the artists who participate interact with peoples of various foreign cultures. “This is a great international program that represents American artists worldwide,” Cosgrove said. “It’s like being called to duty to represent America. Why wouldn’t I want to be involved?”
Of the many items on Cosgrove’s overseas agenda, one key element will be her visits to Astana, Kostanay and Almaty’s “American Corners.” American Corners are, in Cosgrove’s words, “special places where they have movies, games, speakers, all in English.” According to the website for the U.S. Embassy in Kazakhstan, access to the American Corners is free and open to anyone. Their extensive offerings of activities and English teaching materials are intended to help interested Kazakhstani citizens learns English in more organic, engaging manner than a single simple academic course could offer.
“That’s part of it,” Cosgrove noted, discussing the purpose of the ART in Embassies program, “to help them prepare for classes in America.” Cosgrove’s visits to the American Corners, she said, will be “very informal compared to classes and the presentations I will be doing. Those will be big, long productions. It’s very friendly, just us sitting down and talking.” Furthermore, Cosgrove points out that, whereas her classes will be geared specifically toward art students, her American Corner visits will allow her to interact with “children, adults, people of all ages and walks of life.”
“My role as a cultural ambassador is something I’m very excited about,” Cosgrove said. “I wish I could leave tomorrow. I’m ready to go.” Experiencing other cultures is nothing new to Cosgrove. She has also spent time in Italy, where she was a visiting artist at both The International School of Art in Umbria and The American Academy in Rome, and taught students at Santa Reparata International School of Art in Florence. In 1999, she was the recipient of the Medici Award from the International Biennale Exhibition of Contemporary Art in Florence.
“Every time I travel to a place other than home it’s an opportunity to see the world from a different perspective and gain insight from different point of view,” Cosgrove said. “I think that what happens, as an artist, is it doesn’t always take effect immediately. I tend to be very reflective. It takes a while to put things into place. Sometimes it takes months of years for whatever it was that transformed you to settle in. For an artist putting that into their work can have a very profound and long-term effect.” To view the story at its source on wilkesbeacon.com,click on this link.