Made from two vast panels that have been placed together, Host, pinwheel depicts a piece of soft white fabric that has been loosely tied into a knot. The rise and fall of the smooth cloth have been magnified, creating a sense of intimacy as well as ambiguity. Similarly, the work’s physical structure, with its visibly partitioned canvas, is suggestive of a divide between real and constructed environments.

The painting is part of an ongoing series by Scottish artist Alison Watt in which she explores the compelling and multifaceted qualities of fabric. Having focused on documenting the female figure at the beginning of her career, which resulted in the artist working with life models for ten years, Watt has been dedicated to exploring the power of materials since the late 1990s. “Fabric is evocative,” she explains. “The longer I look at it, I begin to lose my connection with it and its original purpose. It seems to exist on the boundary of the material and the immaterial, often suggesting something other than itself.”

Watt’s interest in textiles is nonetheless deeply connected to the human form. Following her graduation from the Glasgow School of Art in 1988, she chose to paint the female figure—namely close friends and family members. “I remember quite vividly when I made my first painting of drapery alone,” she reflects. “I was sitting in the studio looking at the space from where my subject had risen. There was an imprint on the cloth which still bore her weight—I was struck by her absence and how powerfully that conjured her presence. Something beautiful was created by her leaving.” Captivated by the impact of this act, the artist began to make paintings that were increasingly removed from what was directly in front of her. As she explains, the works evolved into “what I was thinking rather than just what I was seeing.” In these compositions, human life is indicated rather than explicitly portrayed through the landscape of the cloth.

Historical painting has been another long-standing inspiration for Watt. In 2006, she began a two-year residency at the National Gallery, London, which enabled her to study reproductions of a number of works in the museum’s collection. Amongst these were two portraits: Jacques-Louis David’s Jacobus Blauw (1795) and Jean-Auguste-Dominique Ingres’s Monsieur de Norvins (1811-12). The sitters in these pictures wear a clothing accessory that was fashionable during this period—the white knotted cravat. The first two paintings Watt made during the residency depicted large, looped shapes that imitated this garment. Francisco de Zurbarán’s Saint Francis in Meditation (1635-39) was another work that resonated with the artist. Host, pinwheel draws directly from this painting, considering the atmosphere that is created by private, interior spaces. Watt has cited her fascination with Francis’s gaping mouth, his stigmata wounds, the eye sockets of the human skull that he holds, and, critically, the heavy robe he wears, which she has described as “almost like a living mass.” The negative spaces in Host, pinwheel—the areas in between the deep folds, the pronounced opening at the knot’s center—are seen by Watt as points of entry that bring the viewer into the picture. “It feels like you are entering that world and becoming part of its landscape,” she adds. “There is a blurring between the interior and exterior of the work. It engulfs you.” Like the fabric itself, these voids become the carrier of something that is sensed rather than seen. 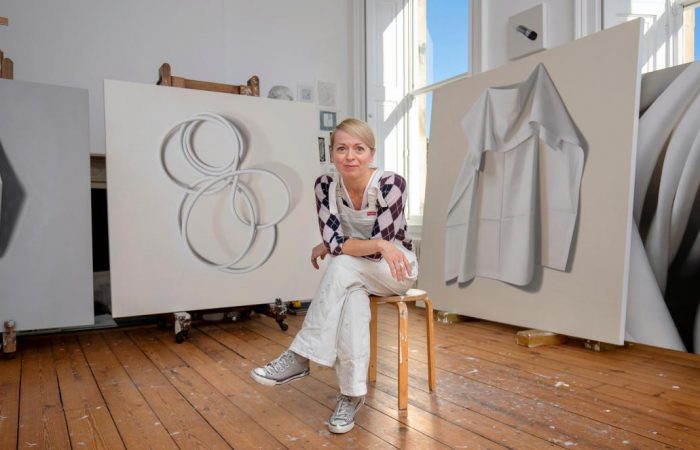 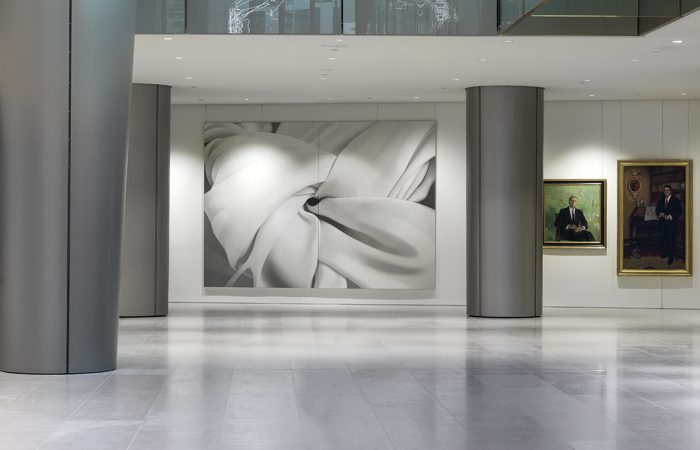 (Or to put it otherwise: consider this
pinwheel of white linen, at its heart
a hollow, in the hollow a small hole.
We cannot see or say whether the hole
passes through the cloth, or if the cloth
darkens itself – by which I mean gives rise
to it, the black star at its heart,
and hosts it as a mere emergent trait
of its own intricate infolded structure.
Either way, towards the framing edge
something seems to have called into question
the linen’s own materiality
and the folds depicted are impossible.) 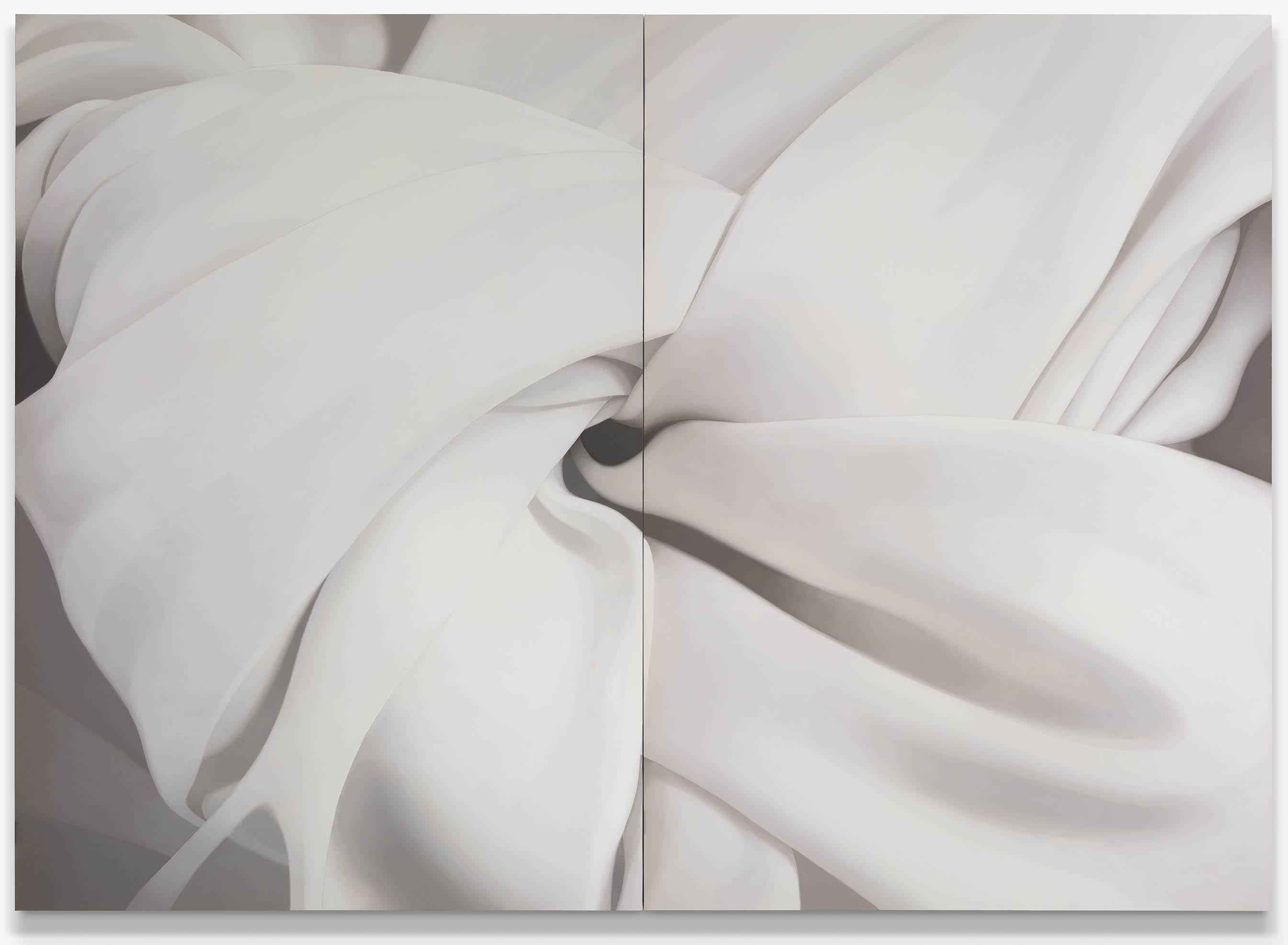