"Art exists within us. It’s about breaking down barriers. Every stitch from every person is like a thumbprint, and when the threads come together in my art, it’s a metaphor of how we’re all connected and related. Only it’s not just a metaphor, it’s the reality." - Marie Watt

Art exists within us. It’s about breaking down barriers. Every stitch from every person is like a
thumbprint, and when the threads come together in my art, it’s a metaphor of how we’re all
connected and related. Only it’s not just a metaphor, it’s the reality.” – Marie Watt

In February of 2015, internationally renowned artist Marie Watt launched the Contemporary
Conversations series. Her lecture, a conversation with the Gallery’s Audain Curator of
Indigenous Art Greg Hill had a great turn out and filled up the NGC auditorium. Watt is a
multidisciplinary artist of Seneca and Scottish-German heritage whose work draws upon Seneca
and Indigenous teachings, proto-feminist role models, oral tradition, biography, and history. Well
known for using reclaimed woven blankets as both material and metaphor, her artistic practice
also often relies upon key elements of social interaction and community engagement. Her work
has earned numerous awards including the 2009 Bonnie Bronson Fellowship Award, the 2007
Anonymous Was A Woman Award, the 2006 Joan Mitchell Foundation Fellowship, and the 2005
Eiteljorg Museum Artist Fellowship. Her work was also featured in 2013 as part of Sakahàn:
International Indigenous Art, the NGC’s first large exhibition celebrating Indigenous Art in
Canada and around the world, pushing the presentation of Indigenous art within Canada into, as
critic Richard William Hill argued, “entirely new territory” with its ambitious scope and rigorous
positioning.

Watt, whose blanket sculpture Skywalker/Skyscraper (Babel) is installed in the Ambassador’s
residence and which has a direct connection to the “Sakahàn” exhibition, where Blanket Stories:
Seven Generations, Adawe, and Hearth was shown, was a wonderful choice to inaugurate the
lecture series.“ In our community, there is no Indigenous word for “art,” but objects of beauty
and utility that we would now refer to as “artworks” have been made since time immemorial. I’m
interested in how we can have more cross-disciplinary conversations, and conversations where
art isn’t institutionalized or segregated from our experience in the world. I think of art as being
something that intersects with science, nature, poetry and literature, and it’s integrated in our
lives.”

On Friday, February 27, Watt participated in an afternoon workshop at Carleton University,
followed by the opening reception for the AIE exhibition. On Saturday, Watt hosted a sewing
circle in the Watercourt Foyer. This was the largest participatory sewing circle to date for the
artist. Because of the high turnout-219 participants- some people waited for a turn to help stitch,
other collaborated on stitching together. And other stitched on the prints that the artist had
provided for each participant. Many people came, of all ages and all skills…”I like to say that
anyone can participate—no sewing experience is necessary. I’m really interested in how people’s
stitches are kind of like a signature. During the sewing circles there’s really no pressure to talk,
but when you’re working with something as humble as cloth, stories tend to flow. My ideal
situation would be that people get to learn something about their neighbor, or exchange emails,
and friendships might come out of that. In an era where so much of the communicating we do is
mediated by technology, it’s nice to be in a situation where we open ourselves up to more
intimate neighborly conversation.”
The fabric components that the participants in the sewing circle worked on might ultimately be
incorporated in a site specific installation for Site Santa Fe in the summer of 2015. But for the
artist, the process behind the work is as important as the final object itself. “..I can’t look at a
piece without knowing that there were a room full of generous people chatting away, stitching
and having conversations, and that it was something made in a community.”

WATT: Hi, I’m Marie Watt, I am in Ottawa as a participant in the Contemporary Conversations series that’s being hosted by the US embassy and the National Gallery of Canada. I will be participating in a symposium at Carleton University with indigenous scholars and art historians and then I will also an open to the community sewing circle at the National Gallery of Canada.
When I host these sewing circles, I invite people to come and go at any point. No sewing experience is necessary, people as young as 3 and as young as 83 have stitched on pieces before. I will exchange a small silkscreen print with people who participate. One of the things that I love about the sewing circles is that it’s an opportunity to share stories and I don’t think there’s any obligation to share stories but when your head is tucked down and you’re working with something as humble and familiar as cloth, I think that stories just tend to flow. And I’m interested in how everybody’s stitch is unique and kind of like a thumbprint or a signature and then I’m interested in how, when those stitches start to intersect, they are kind of a metaphor for how we’re all connected and related.
I see the Contemporary Conversations series as a vehicle for talking about art and its relevance maybe not just in our immediate communities but in the world. As an indigenous person, I think it’s really important to share that there is no word for art in our language, but it is an activity, the activity of being creative and inventive with my own work I’m interested in how communities can be part of this conversation. It’s one of the reasons why I like to collaborate with people and it helps me learn more about other people’s stories and other people’s histories and I guess I consider that a vehicle for larger conversations in the world that aren’t necessarily just specific to art but also relate to politics and literature and poetry and I think the connections are sort of endless. 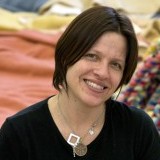