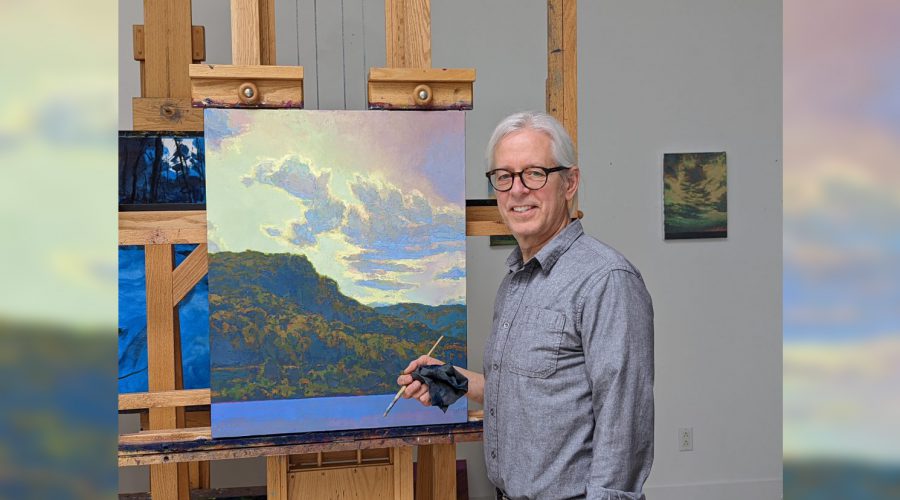 Thomas Paquette’s “Onoko” has been borrowed by the U.S. Department of State where it will be displayed at the U.S. embassy in Ottawa, Canada.

A local artist has had another painting selected to be on display at a decidedly international location.

Thomas Paquette’s “Onoko” has been borrowed by the U.S. Department of State where it will be displayed at the U.S. embassy in Ottawa, Canada. The painting, oil on linen and 54 by 38 inches, will be displayed in the public embassy of the area for three years.

Paquette explained that the painting provides a few of a now-inaccessible waterfall in eastern Pennsylvania, Glen Onoko Falls.

Just days after his visit to paint the falls, public access to it was suddenly and permanently closed due to safety concerns.

This honor in Ottawa is one in a long line of similar recognitions. His work has been displayed at 21 embassies from places as varied as Santiago, Moscow, Taipei and N’Djamena in Chad.

“A couple of these paintings ended up in the permanent collections of the embassies, but most were lent to the facilities only for as long as the current ambassador’s tenure,” he explained. “In this case, when Ambassador (David) Cohen leaves his Ottawa post in 2025, the painting is also scheduled to return to the United States, heading to a gallery or collector.”

This journey started for Paquette when he had a solo exhibition in Washington D.C.

I had a solo exhibition in Washington DC, which one of (the) head curator(s) from the State Department visited,” Paquette said. “He selected five paintings he wanted to send with the new ambassador to Chad.”
Those paintings included landscape scenes in Colorado as well as one from Maine, where the ambassador was from.

“I guess the works became a favorite of the program because not only did they keep the paintings at the embassy for the span two ambassadorships,” he explained, “but they have approached me many more times, when most displayed artists have their works borrowed once or twice as far as I can tell.”

There’s also an avenue via the State Department’s website for artists to have their work considered.

Paquette said he asked the curators years ago to consider his work for the embassy in Canada “as some of my favorite historical painters were from Canada’s Group of Seven.

“In any case, I am very thrilled to be showing in a country whose artists have been so inspirational to me.”

With paintings all over the world, the geopolitical significance of what occurs where those paintings are located isn’t lost on the artist.

President Biden recently met with world leaders and spoke at NATO’s headquarters in Brussels “from the new building where one of my large paintings was recently installed,” he said. “In another interesting moment, shortly after my painting arrived in St Petersburg in 2002, George W. Bush went there to meet with Putin. They worked out a strategic arms deal then, though it obviously could have gone farther, judging by the situation today.”

When several of his works were installed at the embassy in Athens, Greene, Paquette was flown out to give presentations and meet Greek artists.

He met the career diplomat serving as ambassador “at a time when Greece was going through a lot of upheaval and people there were bitter with the Americans for the Balkan war that continued to cause them grief.”

He took some time to call his wife, Ellen, from a public phone “when suddenly an angry mass of people came around the corner, yelling and waving sticks as they marched toward the government buildings. Except for me — I was still on the phone — and about two others I could see, the street emptied almost instantly of non-protesters. Engulfed by the crowd swarming past, I wasn’t sure if I should be saying my last words to my wife on the other end of the line.”

It drove home for Paquette a very poignant view of “the sort of situation that diplomats must be able to weigh and respond to on a daily basis in troubled countries far from the normal protections of home.

“Their jobs are incredibly important to our functioning as a world power. I was a bit in awe of all the folks at the embassy as a matter of fact.”

He’d like to be able to travel to Ottawa to see this new installation but acknowledged that with COVID-19 restrictions it “may be more difficult to arrange than a flight to Athens had been, at least for now.