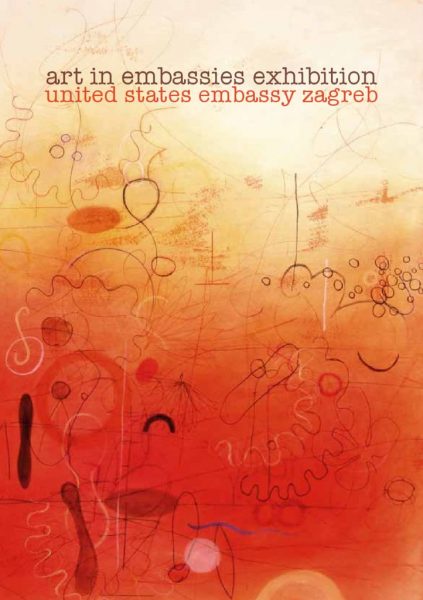 American Ambassador exclusively for “Gloria” presents the art collection which she selected for her Zagreb residence together with State Department curators, but the most important advisor in forming the collection was her mom.

American Ambassador exclusively for “Gloria” presents the art collection which she selected for her Zagreb residence together with State Department curators, but the most important advisor in forming the collection was her mom.

To all those who for the first time visit the residence of Julieta Valls Noyes, the U.S. Ambassador to Croatia, the hostess will with unhidden pleasure and pride first show a representative collection of paintings and photographs by thirteen contemporary American artists. She has decorated the walls of her residence, a beautiful house with a spectacular garden on Tuskanac, with the artwork of her choice, which will be on display for as long as she is the Ambassador to Croatia, and a special catalogue has been printed for this small exhibition. She is delighted that she can on a daily basis observe these art pieces which have, as she says, brought in new light and sparkle into her life.

Every American Ambassador can, in cooperation with the State Department curators, select works of art which mean something to them and which talk about their priorities. Her Excellency Julieta Valls Noyes, the first woman at the head of the American Embassy in Croatia, and also the first Hispanic American in this position, has, with her selection, wished to illustrate what she deeply believes in: that the greatest strength of her home country lies in the fact that it successfully unites all possible diversities.

“The artists represented in this exhibition are of diverse origin and have different forms of expression, but their works function as a unique collection, and I think they look great together at this house. That’s why the motto of the exhibition is the same as the U.S. coat of arms: E pluribus unum (Out of many, one). I am excited and happy to live with these works of art which beautifully show that people of different world views, race, age, sex and religion can live together in one country. I think that’s what makes America great and I am honored that I can share this exhibition with the people in Croatia,” – the American Ambassador explains.

While not everyone can enter the Tuskanac residence, Ms. Valls Noyes says that surprisingly many Croatian citizens visit her residence, so that it always has an audience for the “E pluribus unum” exhibition. As a child of Cuban immigrants, she has included in the collection works of three American artists of Cuban roots, but the exhibition also shows works by African Americans, Asian Americans and artists of European descent, and the large abstract painting, shown on the catalogue cover, is a piece by Emmi Whitehorse from an Indian Navajo tribe. Muriel Hasbun is the granddaughter of a woman who survived the Holocaust and through her photographs tells her grandmother’s story. Sebastian Spreng is known in America not only as a painter, but also as a music critic, but because of multiple sclerosis he has ended up in a wheelchair, can no longer hold a brush in his hand, and now paints with his fingers and with the help of an iPad. The best known artists among those who have lent their works to Julieta Valls Noyes are Julio Larraz and Humberto Calzada, both refugees from Castro’s Cuba. Julio Larraz currently has a large retrospective exhibition in Venice.

The American Ambassador has dedicated the exhibition at the Tuskanac residence to her mother, a connoisseur of art.

“My mom helped me a lot in selecting the artwork’” says Julieta Valls Noyes. “She lives in Miami. My father passed away a few years ago. My parents fled to America when communists came to Cuba. It was difficult to leave everything they had behind and start a new life; they worked hard, and it is a great thing that in America, people who are committed and work hard can become very successful. My father was successful in international business, which is why we lived in different countries. I was born in New Orleans, and as a child lived in Brazil, Ecuador and Venezuela. Since I come from a bicultural family, and have lived internationally from an early age, I was educated and have friends in different countries, speak different languages, and it was only natural for me to choose a diplomatic life. Additionally, I am really grateful to the U.S. for enabling my family to create a new life and to be successful, and I feel that I have to give something back to my home country and that was my main motivation for entering the diplomatic service.”

She graduated with a degree in history and political science from the University of Wellesley in Massachusetts in 1984, and joined the American diplomatic service one year later. She met her husband Nick Noyes, today a retired diplomat, during the entrance exam for the Foreign Service. They have three children: daughter Alexandra and sons Nicholas and Matthew. The two spouses mostly worked at the same diplomatic missions so that they were never separated for too long, and they’ve been in Zagreb since September of last year. Their already adult children live their lives in America, but have already visited their parents in Croatia. Even though Julieta Valls Noyes is an experienced diplomat, Zagreb is her first Ambassadorial position, and she visited Croatia for the first time in 2012, when she accompanied then Secretary of State Hillary Clinton.

“I immediately fell in love with Croatia, although I barely had time to see anything. Even then, I promised to myself that I would return and – here I am! It is my great honor and privilege to represent my home country in this beautiful country. It’s been wonderful and exciting ever since I’ve come to Croatia, and I work on serious and important projects and initiatives which are also fun. Nick and I enjoy getting to know Croatia. We like to visit museums, go out to restaurants … I like everything I’ve tried here, especially fish and blueberries. I prefer just to walk around, watch people, sit down for coffee … I love Dolac, it is really a beautiful and picturesque market.”

The American Ambassador has also visited the famous flea market Hrelic, where she bought a new item for her large collection of inkwells. Wherever she travels, something makes her stroll through local flea markets. As she has previously lived in 11 countries and visited about 80 of them, we could say that she is an international expert for this type of shopping.

“I find flea markets very entertaining, like a treasure hunt. One can find all kind of things at Hrelic, and three percent are cool things,” the American Ambassador assesses professionally.

Her collection of inkwells from all over the world, which also includes a golden fountain pen with the Sultan of Brunei’s dedication, is located on an antique table which she bought while she worked in Spain.

“I’ve brought very little furniture to the residence, but I could not live without this table and the inkwell collection. The first inkwell belonged to my grandmother. I received it after her death, and that’s how I started collecting them. I have an inkwell from all the countries where we’ve lived, and now I have one from Croatia too,” Ms. Valls Noyes tells us. Ms. Valls Noyes collects all sorts of things, such as rhinoceros figurines, containers for holy water, various wooden and metal boxes, and she also has a collection of lavishly framed mirrors from Peru, and small rosewater bottles from Marrakech. Ms. Valls Noyes has also brought a fairly big collection of nativity scenes to Zagreb.

“I don’t think that a single item from my collection is of any particular value, but they represent fond memories for me. My husband and I buy such things. We like to have something special from every place we visit. Whenever we travel to a new country, we always buy a new Christmas tree decoration. When we decorate it, it looks like a United Nation’s Christmas tree.”

They’ve already bought a Christmas tree decoration in Croatia, as well as two paintings, but the American Ambassador still has plenty of time to add new souvenirs and memories from Croatia to her lovely collections.