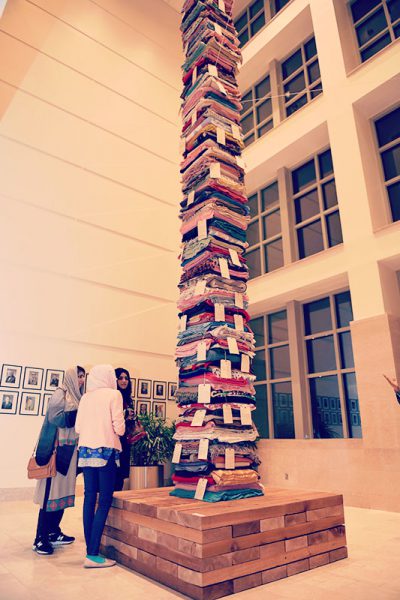 Fifty years after the Kennedy administration started a small effort to place American art in embassies, the program was saluted by Secretary of State Hillary Clinton this month on its anniversary for fostering cultural diplomacy. She also awarded the department’s first Medal of Arts to five artists.

WASHINGTON — When Tom Schieffer was U.S. ambassador in Australia and then Japan, he found that a little-noticed program that placed American art in embassies was one of the best diplomatic investments he made.

Fifty years after the Kennedy administration started a small effort to place American art in embassies, the program was saluted by Secretary of State Hillary Clinton this month on its anniversary for fostering cultural diplomacy. She also awarded the department’s first Medal of Arts to five artists.

“Every American Ambassador decides before going to post what the theme of their exhibition will be,” Schieffer said in an e-mail to the Star-Telegram from Japan where he is visiting. The art is exhibited in public areas.

The Fort Worth native was nominated by his friend and former business partner at the Texas Rangers, President George W. Bush, to serve in Canberra from 2001 to 2005 and Tokyo from 2005 to 2008.

“In Australia my wife Susanne and I had a theme of American Presidents. We chose portraits of several who had changed America. Our favorite object though was a walking cane used by Sam Houston which was inscribed ‘To Sam Houston, the hero of San Jacinto, who never sacrificed his principles for political expediency, from his friend Alexander Fraser.’ Over almost eight years in Australia and Japan, we showed that inscription to five different Prime Ministers with pride and appreciation. When some said they didn’t know that Houston had been an American President, we would laugh and say he was President of the Republic of Texas,” Schieffer wrote.

In Tokyo the theme was American Dreams, with paintings and photographs of immigrants, civil rights activists, woman-suffragists, explorers, artists and musicians.

“The most popular exhibit, however, was one loaned to us by the baseball Hall of Fame in Cooperstown,” he wrote. “It was a glove used by Lou Gehrig when he and Babe Ruth barnstormed Japan in 1934. It turned out that the glove had been given to him by Japanese players after his had been lost in the voyage over. The Japanese manufacturer Mizuno had made it but we didn’t know that when we borrowed it. When we and the company announced that at a news conference it created a very positive sensation all over Japan.”

At a 50th anniversary luncheon in the State Department’s richly appointed Benjamin Franklin Room, Clinton said that the Arts in Embassies program was a personally important cause.

“I’ve spoken frequently about what different kinds of diplomacy we can use to advance our nation’s values and interests,” she told the more than 200 guests. “Sometimes that obviously means old-fashioned diplomacy. Fly to a capital; meet with presidents, prime ministers, foreign ministers, other officials.

“But art is also a tool of diplomacy,” said Clinton. “It is one that reaches beyond governments, past all of the official conference rooms and the presidential palaces to connect with people all over the world.”

The program now has more than 10,000 works hanging or exhibited in some way in more than 200 overseas outposts.