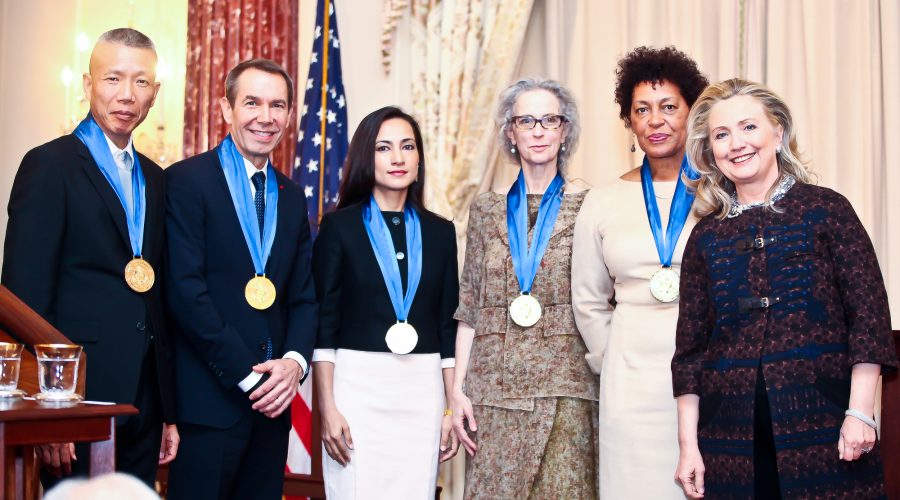 Hillary Clinton will give five artists medals for embassy art

For 50 years the U.S. State Department has been deploying visual art as part of the art of diplomacy, via a program called Art in Embassies. On Friday, Secretary of State Hillary Clinton will give the U.S. State Department Medal of Arts to five artists who have shown “an enduring commitment” to the effort: Jeff Koons, Cai Guo-Qiang, Shahazia Sikander, Kiki Smith and Carrie Mae Weems. It’s the first time the award has been given – and its future will likely depend on whether Clinton’s successors want to make it a tradition. The State Department uses art to generate goodwill in foreign countries by organizing temporary exhibitions and other art events at U.S. embassies and ambassadors’ residences. The exhibitions are group efforts, featuring artists from the host countries as well as Americans. Staff curators for Art in Embassies stock the shows with loans from artists, collectors and museums. Since 2000, the program has gotten into the art-acquisition business as well, picking works to permanently adorn newly built embassies and consulates. For the new U.S. embassy in Beijing, which opened in 2008, Koons provided one of his huge “Tulips” sculptures to stand outside as a 10-year loan. It’s identical to one that fetched $30.7 million earlier this month when it was auctioned by Christie’s in New York City. The art inside the Beijing Embassy includes “Eagle Landing on Pine Branch,” one of Cai Guo-Qiang’s images scorched on paper with gunpowder. After the honors luncheon at the State Department, Cai is scheduled to use his explosive fireworks technique to light up a 40-foot pine tree outside theSmithsonian Institution’s Freer Gallery of Art. The intended effect is a tree image in floating black smoke that will serve as an ethereal doppelganger for the real one. In downtown L.A. last April, Cai scorched a work called “Mystery Circle” onto an exterior wall of the Museum of Contemporary Art’s Geffen Contemporary building. Among the other honorees, pieces by Smith adorn embassies in Istanbul, Turkey, and Mumbai, India, Carrie Mae Weems’ photographic pieces are featured in Madagascar, Liberia and Mali, and Shahazia Sikander, now based in New York City, has a piece on permanent display at the U.S. Embassy in Karachi in her native Pakistan. It was reported in 2009 that Art in Embassies spends about $4.5 million a year for permanent art acquisitions; chief curator Virginia Shore said at the time that artists and dealers support the program via favorable pricing; for the embassy in Beijing, an outlay of $800,000 yielded works with an appraised value of $30 million. A private support group, the Foundation for Art and Preservation in Embassies, provides additional funding and helps secure donations of art. President John F. Kennedy formally established Art in Embassies as a government program in 1963. The seeds for U.S. diplomacy via art exhibition had been planted 10 years earlier, when New York’sMuseum of Modern Art organized a show at the ambassador’s residence in Norway, then continued to cooperate with the State Department on further shows.

By Michael Boehm for the LA Times