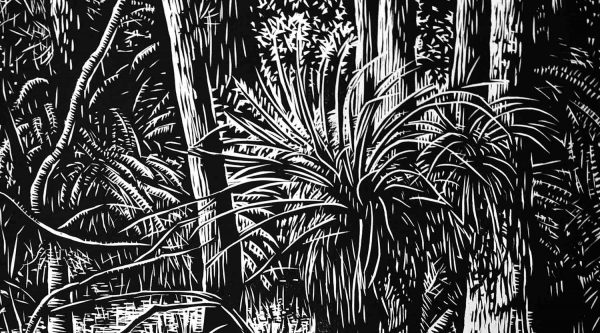 Highlands Today – The artwork of Mollie Doctrow, curator of South Florida State College’s Museum of Florida Art and Culture, will soon be seen by people in the Republic of Niger in West Africa as part of the U.S. Department of State’s Art in Embassies program. Four of Doctrow’s woodcuts will be part of an exhibition on display in the residence of Eunice Reddick, United States ambassador to Niger. The woodcuts represent native Florida habitat and were selected for the exhibition to represent the Everglades, Highlands Hammock State Park, Archbold Biological Station and central Florida. The artwork will be installed in early 2015 and will remain on display for two-and-a-half to three years.

“My woodcuts were selected by Ms. Reddick,” Doctrow said. “She was looking for artwork to display in the embassy residence in Niamey, Niger by artists who have worked in U.S. national parks. My work came to her attention, and the Art in Embassies program contacted me.”

AIE was developed in 1963 under the Kennedy administration to foster positive relations within local communities worldwide. The organization’s professional curators create exhibitions for American embassy residences and permanent collections for American embassies and consulates.
“I’m honored to be selected to participate in the Art in Embassies program and represent the United States as an artist,” Doctrow said. “The mission of the AIE program — that art plays a role on the world stage to promote peace and understanding between countries — validates the work of individual artists working everywhere. My work is inspired by nature, native habitats. While it is important to me to create works of art, I also promote the protection of native habitats through my art.”
Doctrow has slogged through swamps, waded through weeds and wandered off the beaten path to find inspiration for her woodcut prints and environmental projects. “The woodcuts are portraits of plants and plant communities, some endemic, rare and endangered,” she said. “Much of my recent work draws inspiration from working with scientists and others during residencies at Everglades National Park, Big Cypress Preserve and Archbold Biological Station.”

Doctrow’s work is influenced by the Western landscape art tradition as well as by Asian art. “Working mostly in black and white, I explore complex forms and aim to simplify the composition. My artistic goal is to achieve a balance between black and white areas, carved and uncarved areas of the woodcut block, positive and negative.”
Beginning with field sketches of natural places, her drawings are transferred to wood and carved with small gouges. “The carving demands spontaneity, letting go, and following the movement or feeling for the form,” Doctrow said. “The marks become visual shorthand — a way of simplifying complex images.” The carved blocks are then printed on Japanese kozo paper, each print hand-pulled in Doctrow’s studio using an etching press.

Doctrow holds a Bachelor of Arts and Master of Arts degrees in printmaking from California State University, Northridge. She has participated in solo and group exhibitions, has lectured widely and conducts workshops on woodcut art. She has held art residencies at Big Cypress National Preserve, Everglades National Park and Archbold Biological Station. These residencies provided access to remote and pristine areas in Florida, inspiring much of her recent work.
The previous is an excerpt from an article published on highlandstoday.com For the full article visit: http://www.highlandstoday.com/hi/local-news/sfsc-curators-artwork-to-be-displayed-in-west-africa-20141206/