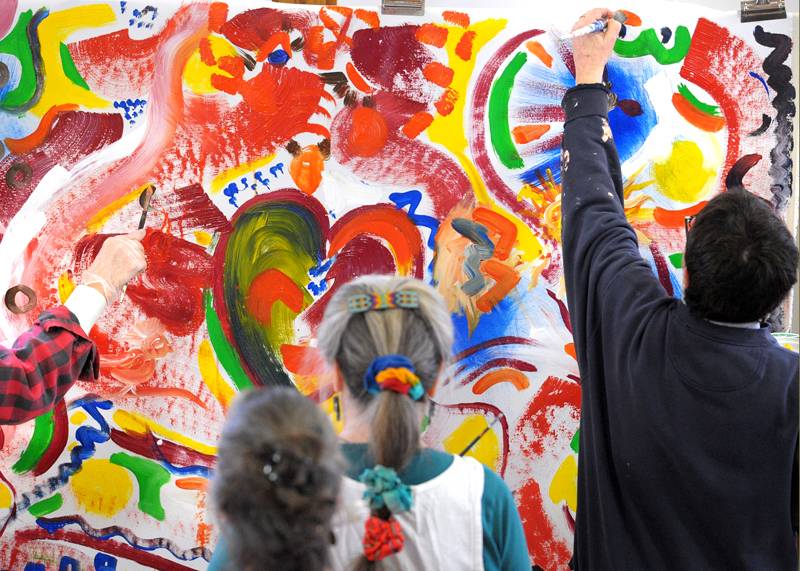 Five individuals worked together in silence on a single, enormous canvas. One woman dabbed orange onto her brush. Another slid a line of yellow onto the work. Once the participants added something, they tended to step back and appraise where the overall piece was going, while another artist stepped up for his or her turn.

Five individuals worked together in silence on a single, enormous canvas. One woman dabbed orange onto her brush. Another slid a line of yellow onto the work. Once the participants added something, they tended to step back and appraise where the overall piece was going, while another artist stepped up for his or her turn.

The notion was that the final result would look as if it were created by a single artist.

This is Tunisian collaborative painting, a process that Stonington artist David Black brought to America and introduced to a new group at Friday’s session.

Black – a former Broadway producer who turned to painting – first saw this particular collaborative art form in Tunisia in 2008. He was invited there when the U.S. ambassador to that country chose Black’s paintings of Stonington for his home. This happened when Black’s work became part of ART in Embassies, a U.S. State Department program that loans art to U.S. diplomatic residences.

While in Tunisia, Black met journalist and artist Hechmi Ghachem. He introduced Black to this collaborative process. Part of the purpose of the art then was to bring together artists during the repressive rule of Zine al-Abidine Ben Ali. (Ben Ali was ousted after the Arab Spring uprisings that began in Tunisia in December 2010.)

“Tunisian collaborative painting is really a new art form,” Black said. “I wanted to find out immediately when I came back, does anyone do this?”

He was invited to Converse College in South Carolina, where 26 art professors told him that no other collaborative painting system like this exists – the biggest difference being that in other collaborative systems, artists have a subject matter in advance.

“At the very least, it’s an incredible learning experience,” Black said. “All the constraints you have as a human being – like, will somebody laugh at me, am I going to make money with this, will I make a mistake – they’re all gone. Because you cannot make a mistake in Tunisian collaborative painting as an artist because no one artist is held responsible for the painting.

“You’re not going to get what you want, either, because there are other people. So what happens is, you pay attention to something most of us never do, which is that which comes unbidden, which is the essence of creativity. … It’s an extremely exciting and rewarding experience, and you don’t have be an artist to experience it, either.”

Black staged his first Tunisian collaborative painting session at Lyme Academy College of Fine Arts in Old Lyme two years ago. Black’s work since then has included workshops at the Art Students League in New York City, where more than 125 artists from 30 countries participated over a five-day period.

“Every single time, it ends up looking like the work of a single artist. I just never understood it,” Black said. “When you tell people the rules, and they hear me say anybody can paint over anybody else’s work, they say, ‘Uh-oh.'”

But, he notes, artists paint over their own work every day. Tunisian collaborative painting takes what artists do separately and applies it to a group.

However, for America, Black has changed a couple of the rules. One is how it’s determined when a painting is finished. Originally, the person who started it decides. Here, any artist who believes the work is complete raises his hand; the participants take a vote, and the majority rules.

At one point at the La Grua Center, a woman raised her hand to indicate she thought the painting was done – and another women in her group smiled at her kindly but shook her head no.

The other change Black made is insisting on absolute silence.

“You need to take away the conversation, the temptation to say, ‘Oh, a little more yellow here,'” he said.

As for the final products from the Stonington sessions, three were vibrant, abstract creations, with a few small representational images woven in – a white bird here, a heart there. A fourth piece focused heavily on words – “Help is on the way” inscribed on one side of the paper, a windmill bedecked with words like peace, joy and love appearing on the other.

These were created by 10 people who were divided into two groups, and who then were reassembled into different teams for a second painting.

One of the participants, Teri Banas of Mystic, said afterward that it was interesting to see how cohesive things became.”It got to a point where the design elements actually worked together,” she said. “It had to sort of emerge, because you start off not knowing where it’s going to go.”

On Black’s schedule for other 2012 Tunisian collaborative painting sessions are those at the American Islamic Congress Center in Boston, The Sorbonne in Paris, Yale University in New Haven, and, more locally, St. Michael’s School in Pawcatuck and the Lyman Allyn Art Museum in New London.