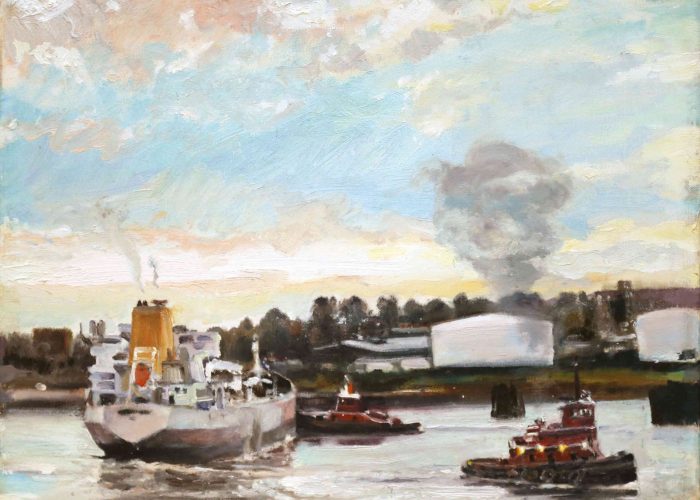 Forecaster.net – Receiving an email asking for personal belongings to be sent to Baku, the capital city of Azerbaijan, is unusual. But last October that’s exactly what happened to Rush Brown, a local artist and retired teacher. As it turns out, Brown has a fan living in Baku: Robert Cekuta, U.S. ambassador to Azerbaijan.

Forecaster.net – Receiving an email asking for personal belongings to be sent to Baku, the capital city of Azerbaijan, is unusual. But last October that’s exactly what happened to Rush Brown, a local artist and retired teacher. As it turns out, Brown has a fan living in Baku: Robert Cekuta, U.S. ambassador to Azerbaijan.

“This came out of the blue,” Brown said Monday. “I didn’t solicit them.” Brown said he was contacted Oct. 14 by the Department of State’s Office of Art in Embassies, which curates exhibits for American embassies around the world. Cekuta had his eye on two of Brown’s pieces, both of which are paintings of ships in Portland harbor, which Brown finished within the past four years. The State Department said Cekuta and his wife consider Maine home, so he sought out art that reminded him of Maine. Azerbaijan is at the crossroads of Eastern Europe and Western Asia. Brown agreed to lend the two paintings to the ambassador, who was appointed to a two-year post last February. When Cekuta’s term is up, the embassy will return the paintings to Brown. He said the Office of Art in Embassies is finalizing a date to pick up the paintings. Sitting in his East Deering home on Monday,

Brown said he didn’t know what to make of the request at first, but thought the notion of his work hanging in Baku was “interesting.” He said once his two paintings make it out there, he’ll look into paying them a visit. “I think I’ll go to Baku and see them,” Brown said. “I’d love to go over there.” Baku is not the only corner of the globe where Brown’s work hangs. He has spent seven summers painting in France, and he has paintings in Europe. He has work hanging in embassies in Canada, and it’s often difficult to keep tabs on where each piece ends up.

“For being so obscure I have plenty of work in the world,” Brown said. “… Who knows where all my work is.” Brown, who taught art at Sanford High School for 20 years, said he has been painting his entire life. He said his work is done “in profusion,” meaning he’ll paint a lot of a certain subject or topic until he moves on to the next idea. He’s done quite a bit with ships and boats, and has also painted scenes of people admiring art in museum settings. “It’s been a marginally respectable pursuit,” said Brown, who works with various media. “I’m quite drawn to it.”

Brown’s work often focuses on scenes and images he sees in person. He’ll see a ship in the harbor while paddling around on a kayak, or an image from his studio window. His work “represent(s) what I’m interested in,” he said. “A lot of the work I do is incidental views,” Brown said. “I try to give a basic portrayal of whatever it is I’m looking at.” Brown, whose work can be seen at Susan Maasch Fine Art at 4 City Center, Portland, said he soon may also be taking on a project that dives back into his past.

In 1983, he painted a 260-foot-long mural at the J. M. Wright Regional Vocational Technical School in Stamford, Connecticut. Now he may be revisiting the massive mural. Brown said he was recently contacted about restoring the mural, which depicts famous inventors throughout history, and is in the style of U.S. Public Works Administration murals of the 1930s. The school was recently rehabilitated, but the mural is still there. While he hasn’t seen it in almost 30 years, Brown said he wants to help restore it if possible.

The previous excerpt is from an article by Collin Ellis To view the full article, visit: http://www.theforecaster.net/portland-artists-work-going-into-diplomatic-service-in-azerbaijan/