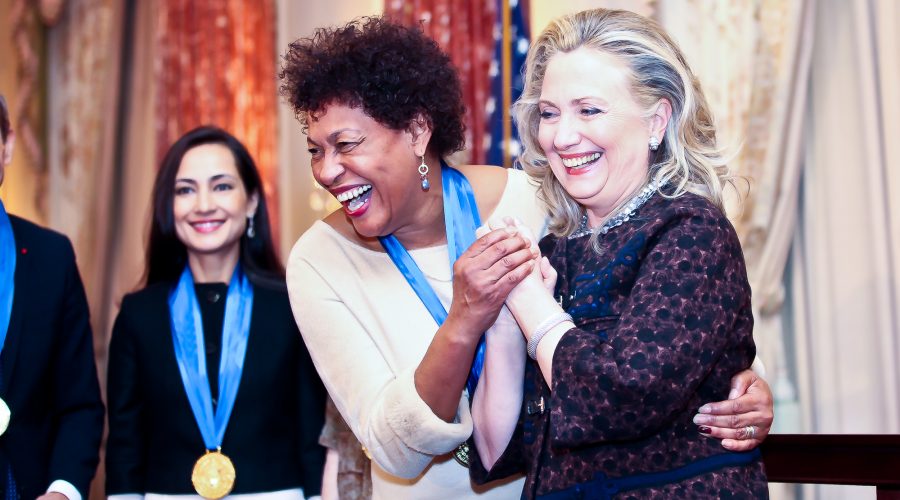 There are different approaches of diplomacy to broker peace and understanding. Cultural programs can serve as a bridge between people and nations. One cultural emissary is photographer and video artist Carrie Mae Weems. She will be honored by Secretary of State Hillary Clinton in an awards ceremony Friday at the State Department. Weems will receive the State Department’s Medal of Arts for her involvement in the Art in Embassies program, which places the works of artists in U.S. embassies across the world. Besides Weems, Clinton will honor fellow artists Jeff Koons, Cai Guo-Qiang, Shahzia Sikander and Kiki Smith. Thursday evening the artists will discuss their works with Museum of Modern Art Director Glenn Lowry at the Woodrow Wilson International Center for Scholars in Washington, D.C. The group also will be feted at a party Friday evening. Weems’ artworks are in the permanent collections of several U.S. embassies abroad, including Liberia, Mali and Madagascar. At the U.S. embassy at the United Nations, four of her works are on loan. Robert Soppelsa, Art in Embassies curator, said the works of African-American artists are featured in embassies in Africa because of the interest among African people. Locally, her works now are on exhibit in the Everson Museum’s community biennial, “The Other New York: 2012.” They are “The Cleveland Museum of Art, ” “Rome, Galleria Nazionale d’Arte Moderna” and “Musee du Louvre.” This fall a retrospective of her work was mounted at the Frist Center for the Visual Arts in Nashville, Tenn. and it will travel in February to the Portland Art Museum in Oregon, her hometown. Weems was one of the contemporary artists included in the “30 Americans” exhibition last fall in Washington’s Corcoran Gallery of Art. The exhibition examined issues of racial, sexual and historical identity. She teamed up with composer Gregory Wanamaker for a Society for New Music commission, “A Story Within a Story,” last fall in Syracuse. At the premiere, her videos were part of the multimedia performance. http://blog.syracuse.com/entertainment/2012/11/syracuse_artist_carrie_mae_wee.html